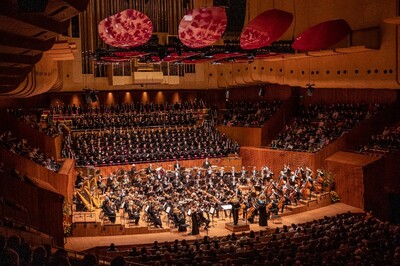 Sydney – Wednesday 20 July, 2022. The Sydney Opera House tonight welcomed musicians and audiences back to its renewed Concert Hall, which has been closed for more than two years for extensive upgrades.

The once-in-a-generation renovation of the world-famous Concert Hall is the largest and final project in the Opera House“s Decade of Renewal. Funded by the NSW Government, the 10-year program of capital works totalling almost $300 million to upgrade the World Heritage-listed masterpiece ahead of its 50th anniversary in 2023.

Minister for the Arts Ben Franklin MLC said: „This evening“s concert was a joyous celebration of music and a significant moment in the transformation of our nation“s most significant cultural icon. Through the NSW Government“s investment in these major renewal works, the Concert Hall is now better equipped to present the full breadth of 21st century performance from classical to contemporary music, theatre and beyond, benefiting artists and audiences for decades to come.“

Sydney Opera House CEO Louise Herron AM said: „Tonight marks a new chapter in the history of the Concert Hall, and a thrilling one indeed – the culmination of years of work by hundreds of people and the most extensive upgrade in Opera House“s almost 50-year history. And it has worked. The hall is ready for what comes next.“

Since the venue closed for renovations in February 2020, hundreds of construction workers, acousticians, architecture and heritage experts have worked together to deliver the most extensive upgrade to the Concert Hall since it opened almost 50 years ago, with all possible care and attention taken to protect and respect the heritage of the treasured performance space.

The project has included a wide range of improvements to the venue, including: better acoustics for both artists and audiences at classical and contemporary music, theatre and comedy; easier access for people with mobility needs, new state-of-the-art theatre machinery and staging systems, and a more flexible and safer working environment for staff behind-the-scenes.

Images and video of the stunning transformation are available to download here: https://www.dropbox.com/sh/ligcywnow1735nl/AACXgz27ptkGnrE0k54CVQh1a?dl=0

A fact sheet with more information about the upgrades is available to download here: https://www.dropbox.com/sh/gh9r9i063nv75k9/AABXYHMGPYdLNx95ewOZ7PrEa?dl=0

Thank you to the NSW Government for enabling the Opera House’s Decade of Renewal; and Opera House staff, resident companies, experts and contractors who made this project possible.

Didgeridoo performance by Matthew Doyle, a descendant of the Muruwari People from Northwest NSW.

The Sydney Opera House is the symbol of modern Australia. It is one of the world“s busiest performing arts centres, the nation“s premier tourism destination and an architectural masterpiece of the 20th century. The Opera House“s broad and diverse programming attracts audiences in person and online, with more than 15 million people attending performances and tours over the past decade. A global beacon for creativity, it is inscribed on the UNESCO World Heritage List and its social asset value has been estimated by Deloitte at $6.2 billion. From October 2022 – October 2023, the Opera House will celebrate its 50th anniversary with a year-long season of special events and performances. This extraordinary celebration of Australia“s cultural icon also marks the completion of its Decade of Renewal, a transformation that sets the stage for future generations of artists, audiences and visitors.